7.4.06
The shirt sponsorship deal between Manchester United FC and American International Group Inc, the world's largest insurer, announced today for US$98.98 million (£14.1 million/year for four years) is worth 57 percent more than the £9 million a year United has been receiving from Vodafone Group Plc.

However, while it is the largest shirt sponsorship in the United Kingdom, it is the second largest deal in the world -- just behind Tamoil's €22m deal with Juventus. Next is the €17m/y deal between Deutsche Telekom and Bayern Munich, equal with the Real Madrid and BenQ-Siemens deal for €17m/y, which also starts next season. Fifth is the €14.5m/y deal between Chelsea and Samsung Mobile announced last year.

However this is by far the largest shirt sponsorship deal for a financial services company. According to Oliver Butler of SPORT+MARKT AG, the financial services sector has been the most prevalent in shirt sponsorship in Europe in the number of deals (26 this season) but the largest deals until now have been around in the UK (Northern Rock with Newcastle United at €7.1m/y) and Germany (insurance company Victoria Versicherung with FC Schalke 04 at €7.5m/y), almost half of the total of the United.

"In all, financial services spent €64m on shirt sponsorship in Europe this season (at an average of €2.4m per club) behind the €82m spent by telecoms companies, so the AIG deal will significantly alter this balance," he told Asian Football Business Review. 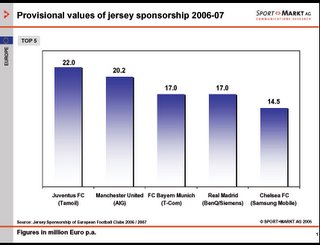 "This relationship will mutually benefit both organizations, said Martin Sullivan, AIG's president and chief executive officer. "We look forward to maximizing the value of this high-profile sponsorship to help grow AIG's businesses around the world."

A study last month by Sports Marketing Surveys Ltd showed that Vodafone is the most recognized jersey sponsor among English football teams.

According to Bloomberg, AIG is among insurers vying for customers in China, where 90 percent of the 1.3 billion population lack health-care coverage. The company this week hired a vice-president to boost sales in Asia, where England's Premier League is the most-watched league.

"We are looking to be more accessible to our global fan base, and having a partner with the knowledge and experience of AIG is invaluable,” he said as quoted by Reuters. "AIG has over 250,000 employees and agents in Asia alone — a region where we have an estimated 40 million fans. This deal presents both of us with so many possibilities."

He said that Bryan Glazer, son of US-based owner Malcolm Glazer, had been involved in setting up the partnership with AIG. United pulled out of a more lucrative contract with online betting company Mansion at the weekend and Gill said the AIG deal proved the Glazers were with the club for the long term.

“We could have taken a bigger deal. We didn’t. We took the deal that was right for Manchester United and this is with their [the Glazers’] full backing, approval and awareness. We are not just trying to make the fast buck. We are trying to do the things that make us stand out from the crowd."
See also: ManU ends sponsor talks with Asian-backed firm (4 Apr)