Malaysian pro club to slash salaries by up to 50%

4.3.06
Malaysian Super League club Selangor has told its players their salaries will be slashed following performances which has left the team at the bottom of the standings. According to Eric Samuel in The Star newspaper, foreign players are the worst hit, with their salaries to be cut by 50% while locals will have theirs deducted by between 10% and 20%.

“The players were warned that action would be taken if the poor run in the competition continues. After two reminder letters, council endorsed for the pay cut beginning from last month,” Football Association of Selangor secretary Hamidin Mohd Amin said. 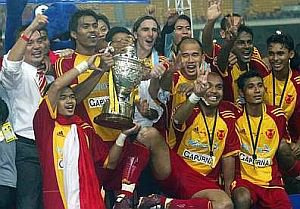 Selangor won the Premier League last year and earned promotion to the Super League and also lifted the Malaysia Cup and FA Cup (pictured right). The FAS had hoped for a repeat of the team’s strong showing when they retained most of the team from last season including influential foreigners Bambang Pamungkas and Elie Aiboi of Indonesia and Argentine Brian Fuentes.

"But this time the team’s performance has been pathetic with not a single win recorded at home so far. They have conceded 26 goals in 10 games and have collected just six points," Samuel reported. The FAS had also issued an ultimatum to their goal-shy strikers Bambang and Fuentes to "shape up or ship out".

Selangor will play at home in the AFC Cup opener against S-League heavyweights Tampines Rovers on 7 March. The two are in Group F with Hurriya FC (Maldives) and Happy Valley (Hong Kong).