31.10.05
An international newspaper survey has concluded that sports editors of daily newspapers allow the sports industry to set the agenda and the priorities for coverage of events. The biggest survey of sports journalism ever was undertaken by the Danish news research group, the House of Monday Morning, on commission from Play the Game and the Danish Institute for Sports Studies.

The survey, based on 10,000 sports articles in 37 newspapers from 10 different countries in Europe, Noth America and Australia, claims that sports pages are dominated by those sports, personalities and events that have the biggest effect in terms of advertising, sponsorship, numbers of television viewers and spectators in the stadium.

"The commercial game of sports is exerting such pressure on journalism that it has become impossible to work according to classic ideals of journalism," said Knut Helland, professor at University of Bergen in Norway and an expert on sports journalism.

Academic experts and sports editors point to other factors that hamper the ability to do critical and problem-oriented sports journalism. Many clubs and sport stars attempt to exclude critical journalists from getting interviews and try to convince editors to remove critical journalists from their beat. At the other end of the spectrum, newspaper readers are incredibly conservative and resist attempts to change the way sport is covered.

"The survey documents that the newspapers are failing one of their key responsibilities in a democracy: To carefully monitor sports organisations and the sports industry which has amassed enormous economic and political power in the last 30 years," said Jens Sejer Andersen, director of Play the Game.

"The editors and publishers - not the sports journalists - carry the main responsibility for newspapers electing to play the tune of the entertainment industry and not challenging the sports industry. So it is also their responsibility to ensure a revival of the journalistic ideals which should apply equally to sport as to all other powerful sectors in society," he said.
Key findings from the survey 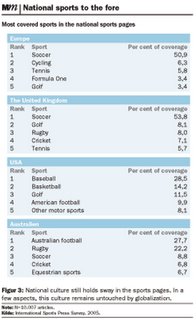 When sports with a specific national interest are excluded (for instance baseball, basketball and American football in the USA, see table) the survey shows few differences in the way that newspapers in different countries cover sport. Instead the survey documents that sports journalism is a global culture - just like sport itself. The priorities in sports journalism are more or less the same and it does not matter whether the newspaper is based in Washington, Bergen, Vienna or Bukarest.

Match reports, results and previews dominate: 58 percent of the articles on the sports pages deal with current events.

The focus on doping is waning: On average 1.5 percent of the sports articles deal with doping which is less than in a previous survey.

Marginal exposure of social aspects of sport: Only 2.5 percent of all sports coverage deal with the social impact of sport.

Women are invisible: Men are the focus of 86 percent of all sports coverage and only one in 20 sports articles is written by a female journalist.

Journalism without sources: 40 percent of all sports articles refer to only one source in the text. 20 percent of the articles do not refer to any sources at all.

The sources come from within the sports world: Athletes, coaches and representatives of clubs dominate completely as sources for sports journalists.

Increasing globalisation of sport: Compared to previous studies, this survey indicates that sports coverage is becoming less focused on national interests and in Europeann countries stories with an international focus make up more than half the coverage.